JKHCBA RELEASES BOOK ON ARTICLE 35- A. 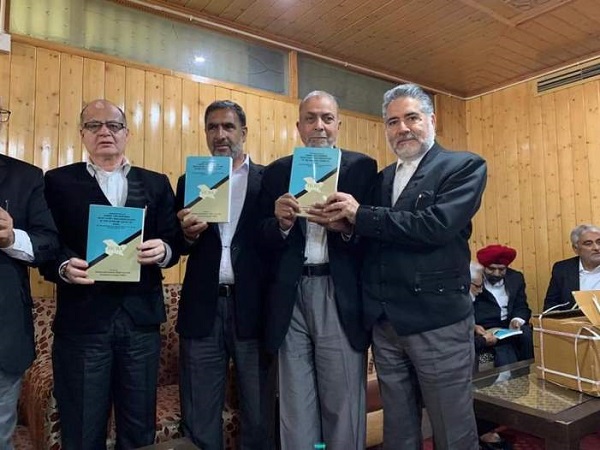 Srinagar: The Jammu and Kashmir high court bar association on Wednesday released book on Article 35-A.

A general body meeting of the lawyers practicing in the High Court was on Wednesday held at 10:30 AM in the Conference Room of the Bar Association at High Court, Srinagar which lasted for about an hour.

In the meeting, the difficulties being faced by the lawyers in the High Court due to non-listing of their cases and non-taking up of cases from the main list came up for discussion.

According to a statement issued here, the Bar members while expressing their satisfaction over the decision of the High Court to take up regular cases in the first half and supplementary, thereafter, which was notified in the evening of 9th of July, 2019 stated that a team of senior members of the Bar Association should be constituted who will come up with a proposal as to how the other demands of the Bar members would be met by the High Court.

The Bar members, however, criticized the role of some of the lawyers, who despite the call given by the Bar Association on many occasions in the past, have chosen to defy the decision of the Association and have appeared in the cases before the High Court and other courts and stated that such defiance constitutes indiscipline and deserves to be viewed very seriously in future.

They also expressed their gratitude to the UN High Commissioner for Human Rights’ second report on Kashmir, calling upon the 47-member-State Human Rights Council to consider the possible establishment of a commission of enquiry to conduct a comprehensive, independent international investigation into allegations of human rights violations in Kashmir and declaring the continued arbitrary detentions and cordon and search operations to be deeply problematic, as do the other special legal regime including the Armed Forces (J&K Special) Powers Act, a key obstacle to accountability.

The members also appealed both India and Pakistan to take credible and concrete measures towards the implementation of the report so that the rights guaranteed to the people of J&K by the domestic and international laws are respected.

It was stated that the book will help the lawyers and other people interested to know the Kashmir dispute in its proper perspective and its release at this point of time was the need of the hour.

As per the handout issued here, the book is also available for sale to general public.

The Bar members also expressed their concern over the attaching of the house of Late Mehmooda Begum Wd/O Ghulam Hassan Shah, mother-in-law of Asiya Andrabi, situated at Iqbal Colony Soura u/s 25 of the ULA(P) Act of 1967 and terms the same a worst kind of human rights violation of which notice should be taken by all those who believe in rule of law and have respect and regard for the inalienable and fundamental rights of the people of Kashmir.

The Bar members also condoled the death of Mohammad Shafi Khan, the father of Javaid Ahmad Khan, who has been sentenced to life imprisonment by a Court at Delhi and is languishing in Tihar Jail, New Delhi for the last more than 20 years for none of his faults.

The Bar members also expressed their serious concern over the deteriorating health of the wife of Ayaz Akbar who is suffering from cancer and needs urgent attention of her husband, who is, however, imprisoned in Tihar Jail for the last two years.

The Bar members also expressed their concern over the detention of Mohammad Yasin Malik and other leaders and activists and the ill-treatment meted out to them in jails and requests the members of international community including International Red Cross and other human rights organizations to take notice of these happenings in jails and help the detenues and other undertrial prisoners in living a dignified life.

It is pertinent to mention that Article 35-A is a provision incorporated in the Constitution giving the Jammu and Kashmir Legislature a carte blanche to decide who all are ‘permanent residents’ of the State and confer on them special rights and privileges in public sector jobs, acquisition of property in the State, scholarships and other public aid and welfare.

The provision mandates that no act of the legislature coming under it can be challenged for violating the Constitution or any other law of the land.